Recently we (the VVOB team in Cambodia) welcomed Philippe Mollet from the MIRA observatory in Grimbergen. His 3-week stint at the Kandal teacher training college started with a focus group. Participants discussed and selected the 15 most interesting items from a list of 30. In true “Mission Impossible” style, Philippe got 10 days to prepare the workshop.

During the 3-day workshop, participants learned about these 15 astronomy topics. Focus was on the content, but also on finding ways to explain the often abstract astronomy topics in an accessible way.

A nice way to impress for example is to ask them who big the Moon is in the sky. You can be sure they will show it much bigger than in reality (you can actually cover it with your little finger, even when there’s a “supermoon”)

During the three days, participants also learned (tried) to fire water rockets, analyze the spectrum of the Sun, walk along all the planets of the Solar system (on scale) and make a drawing of the Sun. In the evening, we were lucky to observe Jupiter and some interesting constellations such as the Orion.

The workshop’s programme was more content driven than other workshops, responding to a need by teacher trainers to improve their understanding of these often abstract and complex issues.  Besides, tools and activities were offered (where possible low-cost ones) to teach astronomy in their own class.

From this workshop, participants obtained more detailed insights on astronomy, an important part in the earth science (and physics) curriculum. Above all, everyone was inspired by Philippe’s workshop.
The Interpersonal Action & Learning Cycle (IALC) assumes that the only knowledge we have is our own perceptions and what sense we can make of them. In this way, all knowledge is constructed.  According to Zimmer, collaborative discussion makes knowledge jointly constructed within the discussion. In my view, learning as construction is a more accurate metaphor than learning as acquiring. 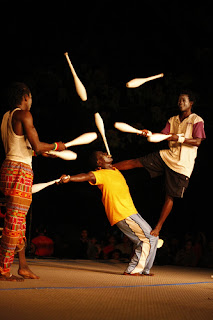 For example, when a physics teacher explains heat transfer to students with experiments and exercises, students will build for themselves an understanding of heat transfer based on the what the teacher says, prior knowledge, intuition or experiences in daily life.  The likely outcome is that the understanding of heat transfer that the student has built will be very different from the understanding that the teacher has.  They may both be scientifically correct, but the student may link heat transfer with other examples, or may not make the link between heat transfer and atom structure of materials.
Learning as transfer assumes that the object of learning is fixed and is passed from teacher to student.  Learning as construction accounts for the individual building of understanding.  Learners engaging in collaborative discussion are building an understanding together, whereas in a competitive debate learners want to imposes their perception of the learning object on each other.  I found this idea of joint construction of knowledge very similar to the learning theory of Connectivism, where knowledge is also regarded as a network phenomenon.  Knowing something in Connectivism means that that something is connected to other concepts and ideas, so it gets a meaning.  This network can be individually constructed or in a community.

Applying the metaphor to my own learning of the IALC, I didn’t learn by acquiring it from a teacher, but I constructed my idea of the IALC by reading the manual and article, linking it with forum discussion and relating it to my own experience in online and offline learning.  In this way, my understanding will be very different, but not necessarily less correct, than those of other learners, who made sense of the theory by linking it to their own environment.
Looking back at the “flavor” of the forum discussions so far and comparing them with the “traps” Zimmer describes and the Interpersonal Action & Learning Cycle (IALC), I think that:
Another difficulty with applying the IALC is that it’s a different way of writing than standard academic writing.  In academic writing you’re not allowed to write in the first person or write your personal opinions.  Of course, the objective of an academic text may not be to start a collaborative discussion, but rather to present results of your research or to convince people of your theory.   I think that the IALC is particularly useful in discussions where both parties are open to learn and less when one party wants to convince the other or win the argument.
One of the activities in Week 7 of the H800 course goes into detail on how to deal with multiple perspectives in online learning.  How do you stimulate collaborative discussion in online forums as a tutor?  How can you make sure as a learner that people read your responses and react on them?
The Interpersonal Action & Learning Cycle (IALC) offers a framework to apply in online and offline discussions.
Zimmer argues that English and many other languages contain a communication trap.  We often construct sentences that imply that what is said is a universal truth, and not merely the opinion or the belief of the speaker.
He identifies three consequences of this trap, all hindering collaborative discussion:
As a solution Zimmer also presents three components:
–
The three solutions reinforce each other, creating a cycle.  This cycle distinguishes clearly between offering your perceptions and blaming or praising the other.  Both pass judgment to the other, thereby destroying the equality of the dialogue.  Even worse are to subject the other to attack or approval, often including “inquisitorial accusation”.  This means asking all kinds of questions, with the aim to find weaknesses in the other’s position.
Zimmer believes that the use of the IALC is not limited to discussion on online forums.  The cycle can be applied in reducing confusion between teacher-centered and student- centered assessment. A teacher-centered tests students in how far they master the interpretation of the teacher.  A student-centered assessment will invite learners to express their own opinions.
Also in module design the IALC can be applied.  The cycle requires the teachers to share their perceptions, but allow learners to do the same.  It found it interesting that he also made the link with professional conferences, where keynote speakers give an outline of the topic, telling the audience what to think about the conference theme, instead of asking the audience what they would want to learn.  More worryingly, according to him, is that many conference visitors and students expect to be fed with perspectives and perceptions, rather be helped to form their own ones.  In this way, learning becomes consuming.  In Zimmer’s view the IALC can reverse this trend, because it helps to create collaborative discussion and learning.
I had an interesting Elluminate discussion today with Sukaina and Isabella, two friendly fellow learners, about what we would change to the current assessment method, which I explained in a previous post.
Before making changes, we discussed about the objective of the assessment.  The assessment may actually serve various objectives, like:
Although the writing of an essay may not cover all the skills necessary for the course, I feel that quite a lot are actually covered, such as selecting, reading, assessing and retrieving materials, formulating one’s thoughts, connect different ideas and creative thinking.  So, coming up with something better is not easy.  We found that writing our assessment forced us to evaluate our personal learning management, re-thinking the tools we use to store resources, text fragments, notes and references in an optimal way.  In this way, the course resembles a MOOC, in the way that finding your way in the wealth of learning materials and discussions is an important learning outcome in its own way.

One area for improvement is to strengthen the interactivity of the assignment through peer assessment.  Learners could be stimulated to read each other’s paper (as an optional activity) and comment on it.  This may provide useful feedback for both parties, in particular for students new to the OU.  A second way of adding interactivity could be to include a discussion with the tutor about the paper as part of the assessment.  During this discussion, the tutor could ask additional questions or clarifications about the paper.
A second area for improvement could be to increase the weight of the contributions in the online discussion forums.  A 20% weight in the continuous assessment doesn’t seem to fully correspond with the time spent on reading, writing and reacting on the forums.  Nevertheless, I find interactive forum discussion useful for many activities.
A final issue for discussion is the word limit, for some welcoming, for others annoying.  In my view, being able to express your thought concisely is one of the skills to learn.  It forces yourself to remove all unnecessary clutter from your writing.

It has been a while since I last posted on my blog.  It was money time for the first tutor-marked assignment of the H800 course and, although it only counted  for 10% of the total grade, it’s always nice to get off with a good start.


The assignment let us select 3 activities from the first seven weeks of the course and discuss (in 500 words each):

The second part entailed writing a short discussion on two key ideas of block 1, learning as metaphors and the role of participation in learning.
Marks and feedback are expected in a few weeks. In the meantime we have the range of activities in week 7 to keep us busy. Expect posts on these soon.