The Master Switch, from Tim Wu, is a gripping read about technology, communication and by extension, about technology in education.  It’s not focused on the latest technology and how it is supposed to revolutionise education.  In contrary, it takes a look back at the times when technologies such as the telephone, AM and FM radio and television were the latest technologies in town.  Why would the Internet fare differently as its predecessors?
Cult of the amateur
Wu detects a recurring pattern in how new communication technologies integrate into society. First, they disrupt the current order, breaking down monopolies and crushing dominant corporations, like Western Union was beaten by the rising Bell Company.  The result is a period of openness, creativity and experimentation, characterised by a ‘cult of the amateur’.  Unfortunately, this period doesn’t last long, as a few companies consolidate ever larger parts of the market and establish monopolies.  These can be vertical – the same company controls all the steps in the production process, for example from making movies to the distribution in theaters – or horizontal – one company controls one sector, such as all the theaters.  High barriers to market entry are erected and a period of closeness takes hold until a new disruptive technology starts the process again.  This cycle is not a scientific law though and Wu describes how corporate firepower (in case of the radio industry) and government policy (ultimately in the case of the Bell monopoly) can suppress the slow-moving cyclic movement. 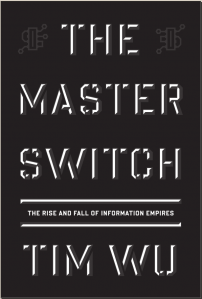 Net Neutrality
The book showed me that the Web 2.0phase of the Internet is neither the only possible way the Internet works, neither will it likely stay that way.  Web 3.0 is used to describe  the Semantic Web, but in the future we may refer to Web 4.0 as a closed Web. The current openness of the internet is threatened from different sides.  So could the principle of net neutrality be broken.  Net neutrality refers to one of the core ideas of the Internet and implies a network that ‘treats all it carries equally, indifferent to the nature of the content or the identity of the user.’  Internet providers (ISPs) could prefer certain (higher paying) clients or give priority to traffic to (friendly) websites.  Second, companies as Facebook and Apple are building their own ecosystem within the Web, with access and content controlled by them, abusing their power to become a ‘switch of necessity’.  Wu highlights the cosy relationship between Apple, the entertainment industry – which sees the prospect on steady revenues thanks to Apple’s closed devices – and internet providers such as AT&T, which get exclusive rights for Apple’s devices.


Google’s intentions
Google’s position is portrayed as the opposite to Apple in its adherence to openness.  Wu ascribes this openness to a lack of vertical integration. Google hardly possesses any content or hardware. Its search algorithms are its most precious asset.  Not having any content to sell makes that Google doesn’t need to give priority to some kinds of content, making it a ‘switch of choice‘.  Google’s engine tends to equalise giant and one-man retailers, returning McDonalds and McSpotlight within the same search page.  This lack of vertical integration leaves it vulnerable as well, as network or content providers could decide to leave Google for what it is.  The recent takeover of Motorola Mobility by Google could be a – worrying – venture away from this logic towards a future of more vertical integration by Google as well. This NY Times article on talks between Google and Verizon indicate that net neutrality may well come under pressure.
Wu argues that the cycle has already started swinging in the direction towards a more closed Internet.   The centralisers foresee a future in which ‘the best content from Hollywood and New York and the telephone and networking power of AT&T will converge on Apple’s appliances, which respond to ever more various human desires.’  It’s a future without ‘spam, faulty apps and junky amateur content’, but also a future where Internet devices are made for consumption and not anymore for producing things.  ‘The champions of openness’ propose an untidier world of less polish, less perfection, but with more choice.’
The Master Switch in Education
I believe that the discourse about technology in education experiences the same distinction between these two visions on the internet.  Those advocating the characteristics of Web 2.0 (user-generated content, social, content abundance) and who stress its alignment with recent insights about learning, as a social and constructivist activity favour an open future for the internet.  Those focussing on the attractive educational apps for the iPad or iPhone favour a closed future for the internet, in which the distinction between consumers and producers is restored.
Wu closes the book with two warnings.  First, the Internet is not just one channel of communication, but combines all channels (telephone, television, radio..).  As a consequence, ‘the potential power to control is so much greater.’  But, finally, it’s up to us ‘to secure our sovereignty over the choices that our information age has allowed us to enjoy.’  For example, when choosing which phone or tablet to buy…
The Master Switch from Tim Wu is published with Knopf (2011)
* Here is another  discussion of the book and here is a fragment of an interview with the author, Tim Wu.


* John Naughton discusses The Master Switch on the occasion of the release of The Artist:

“Wu’s contention is that the history of the telephone, movie, radio and TV industries displays a common feature: they all go through a cycle, in which they start out chaotic and gloriously creative (but anarchic), until eventually a charismatic entrepreneur arrives who brings order to the chaos by offering consumers a more dependable and technologically superior product, the popularity of which enables him to capture the industry. Zukor did that for the movie business, just as — in our time — Steve Jobs did it for the music business. And in The Artist Zimmer immediately grasps the significance of audio and goes for it like an ostrich at a brass doorknob (as PG Wodehouse would have said).”

With the final assignment, the EMA, submitted, it’s time to look back and jot down some impressions of this online course, the only compulsory one in the road towards the OU’s Master in Onlineand Distance Education (MAODE).
It definitely made sense for me to study technology-enhanced learning, which includes e-learning, through an online course.  I believe that I learned as much from the course materials as from actively experiencing the online course as an ‘informed observer’.  As the course materials were rather heavy on papers, bringing the main debates about technology in learning to the fore, these two forms of learning were complementary.
Online courses are sometimes touted as bringing ‘flexibility in time and space’.  The two should be put into perspective though.  The course starts at a fixed date and features weekly activities and regular deadlines.  You can afford skipping a few days or a week at most, but all postponed work should still be caught up with. Besides, if you’re a few days late you probably miss all the discussion in the forum.  Flexibility in space is more realistic as all course materials and communication can be found online.  However, I found myself still printing most materials as I find it easier to take highlight and notes.  I also found myself working for 90% of the time at the same spot.  A fixed place to study helped me concentrate on my work.
The weekly course texts are excellent and are one of the main draws of the course.  The texts are clearly composed with great care and written in a style that is accessible and motivating, like someone sitting in front of you is explaining the material to you.  These texts refer to different activities, readings and web links.  Usually readings come with some questions that can be discussed on the forum.  I enjoyed interacting in this forum, sharing my thoughts and readings others’ reflections.  The forum made the course more social and motivating for me, as well as the occasional Elluminate audio conferencing sessions.  Most participants were somehow active in the education sector and reading their take on the questions enriched the course for me.  Unfortunately, some participants preferred not to engage actively in the forum, and the little weight in the assessment didn’t seem motivating enough.

The course is designed by a course team, unlike courses in brick-and-wall institutions, which are often the product of one professor.  A group of about 20 people has contributed to the H800 course, most of them OU staff, some hired from outside.  I believe it certainly enhanced the quality of the course, as each topic has been written by a specialist and team work increases the likelihood that multiple perspectives would be considered.  For example, some of the course team members are clearly more sceptical about the role of technology in learning.  This diversity is for me also one of the advantages of formal studies, as obtaining a similar quality and range of viewpoints would be very hard.
Although the course team has designed the course, all student-teacher interactions are with a tutor.  Positively, my tutor was very active on the course forum and responded quickly to all kinds of questions.  Nevertheless, I would have liked more interactions with course team members, for example to discuss papers they’ve written that were included in the course.
It’s another two and a half months until the final results are published.  The course is a 60 credits one, or one third of a Master Degree.  In the meantime, I will be recharging, catching up on some of the suggested readings in H800 – there were so many, I could easily spend another year reading them – and thinking about the next course.  H807 is the most likely option.