A wiki is a collaborative authoring environment that can be used to reach certain pedagogical objectives, in particular when the underlying pedagogy is social constructivism.  This learning theory asserts that learning occurs by reconstructing knowledge in social activity.  Wikis can be used to support group activities, peer and tutor reviewing and knowledge creation and sharing activities.  Some people would say that these are the ‘affordances’ of wikis. The learning artefact is usually a collectively authored text. Sukaina Walji provides an excellent overview on wikis in a FAQ format on her blog.
Many practitioners would argue that wikis help developing important skills with students, such as working together in a team, developing argument and consensus and writing skills (e.g. Mak and Coniam, 2008).  Minocha and Thomas (2007), for example, write: “The students’ accounts show that collaboration enhanced their learning on the course through clarification, re-interpretation and re-assessment, and reflection.”
Ruth and Houghton (2009) distinguish five main characteristics of wikis:
Detailed empirical accounts of the use of wikis give a more nuanced view of a potentially useful tool if embedded in sensible learning activities.  Some issues that are mentioned include:
Wikipedia is invariably hailed as the ultimate wiki example.  However, Jaron Lanier puts question marks with the reliability of the online encyclopaedia.   Tumlin et al (2009) point out that entry creators (‘Wikipedians’) are in general aware of the limitations of Wikipedia, but that users tend to overestimate its authority.
Lanier considers Wikipedia and by extension wikis as tools that reduce rather than stimulate creativity (‘hive mentality’).  It’s the difference between collaboration (with a focus on consensus, shared objectives) and cooperation (sharing and promoting individual creations and viewpoints), which is also highlighted by Downes.  Lanier suggests to his readers:
“If you put effort into Wikipedia articles, put even more effort into using your personal voice and expression outside of the wiki to help attract people who don’t yet realize that they are interested in the topics you contributed to.”  (2007, 15).
I believe wikis are an interesting tool that teachers should explore and evaluate whether they can be useful in the class.  However, whether students will collaborate, construct knowledge together and learn in a different way (characteristics of wikis) depends in my opinion less on the tool than on the design of the activities.  You don’t need wikis for collaborative learning.  A word processor, Google Docs or even a piece of paper will do.  On the contrary, if the introduction of a wiki is not embedded in an intelligent learning design, the only result might be that students divide the work and that everyone writes his/ her part in the wiki without much collaboration or peer review.
References:
This week in H807 features an elaboration on the popular term ‘affordances’ in educational technology.   This relates to the broader discussion on if and how technologies affect our behaviour.  Is our behaviour (as a learner) influenced by the use of e-mail, blogging, e-readers etc.?  For example, ‘writing with pen and paper required the user to think linearly, writing only when the text was near completion, in contrast the use of a word processor allows you to think non-linearly and to adapt and develop ideas as they emerge.’ (McGrenere and Ho, 2000, p6)
The term was originally coined by Gibson (1979), but has since undergone an evolution in its meaning.
In Gibson’s view affordances are latent in the environment, objectively measurable and independent of the individual’s ability to recognise them, but are always in relation to the actor (Wright and Parchoma, 2011, p.249).   Its meaning was confused by the appropriation by Norman, who distinguished between ‘real affordances’ (conform to Gibson’s notion) and ‘perceived affordances’. This shift incorporates subjective interpretation and mental activity, which were explicitly rejected by Gibson.
Conole and Dyke (2004) introduced a taxonomy of affordances for educational technology, aimed at helping practitioners to design activities.  The affordances include:
The paper from Conole and Dyke (2004) generated an interesting discussion with a response from Boyle and Cook (2004) and a counter-response from Conole and Dyke (2004).  They argue that it’s wrong to apply the notion of affordances within a social constructivist context.  ‘Gibson’s approach is (a) not constructivist, and (b) not social’ (Boyle and Cook, 2004).  They claim that other theories of perception are more reconcilable with social constructivism.

The main critique centres on the confusing nature of the concept, because of its appropriation by different theoretical streams.  Oliver (2005) concludes that the term is highly problematic in both its origin and application.  McGrenere and Ho (2000, p.8) state that ‘as the concept of a affordances is used currently, it has marginal value because it lacks specific meaning’.
‘The term becomes shorthand, causally ‘afforded’ by the technologies and presented as obvious and inherent.  Rendering something as complex as the idea of anytime anyplace learning in this way closes it to investigation; it simply becomes a black box with an input of access, which occurs anytime or anywhere, and an output of learning. What is going on inside the black box has been obscured from view and closed from enquiry.’ (Oliver, 2005, p.252)  ‘Once prevalence and ubiquity are expanded to include and acknowledge heterogeneity, the supposed ’affordances’ start to break down and its black box begins to crack revealing a much more complex system than a mapping of affordance as input to pedagogy as output.’ (Oliver, 2005, p 254)

Oliver (2005) denounces the taxonomy of affordances, suggested by Conole and Dyke (2004).  ‘This list [taxonomy of affordances] groups together qualities attributable to the technology (e.g. multimodality and non-linearity), to its user (e.g. reflection) and to their mutual relationship (e.g. immediacy). Arguably, such a list does not conform neatly to Gibson’s, Norman’s or McGrenere & Ho’s formulation of affordance. Some elements seem consistent with the positivist origins of affordance. Others seem entirely unrelated – reflection, for example, would be denounced by Gibson. Moreover, the idea that reflection might be a response to an offering by technology (implying some causal link) rather than an act of personal agency seems odd. ‘(Oliver, 2005, p.409)

However, Oliver (2005) acknowledges that a list might be useful, but objects to the use of the term ‘affordances’.  ‘The notion of ‘affordance’ seems ill-suited to legitimating this conglomeration of claims about perceptions, actions and characteristics. Something much broader is required. Substituting the word ‘claims’ for ‘affordances’, for example, provides a more plausible framework with no loss of the central message and no diminution of utility to practitioners.’ (Oliver, 2005, p.409)
A brief ‘tour’ of the literature provides some insight in the origins and various interpretations of the term ‘affordances’.  It seems wise to either refer specifically to the intended meaning when using it (for example, by referring to Gibson or Norman), or drop the term altogether, using more neutral terms as ‘claims’ or ‘potential’ instead.

Key references
Last week saw the organisation of a workshop on physics education for teacher trainers in Cambodia at the regional teacher training centre in Kandal province.  All Cambodian physics teacher trainers were present, what makes around 20 people.  The workshop lasted 5 days.   Each day we discussed a different part from the curriculum.  There were days we focused on sound, mechanics, pressure, optics and electricity and magnetism.  The last day participants collaboratively made a lesson plan using materials they’d learned.   There was a strong emphasis on low-cost experiments, but also attention for simulations and animations and student-centred approaches. 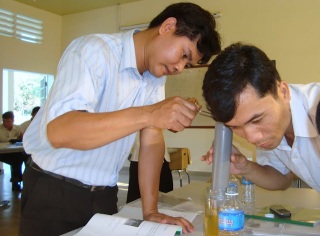 The concept underlying the workshop – and actually the whole programme – is the TPACK concept (Mishra and Koehler,2006; Koehler and Mishra, 2007; Abbitt, 2011), an extension of Shulman’s idea of pedagogical content knowledge.  This is knowledge of pedagogy that is applicable to the teaching of specific content.  TPACK extends this idea with technologies.  The core idea of TPACK is that the use of technologies in education – and in Cambodia analogous technologies such as experiments, posters or cards play a much larger role than digital technologies – should be considered in relation to content and pedagogy.  Just using an experiment or an animation just for the sake of it, without thinking about how it will make your lesson better is not useful. This may seem obvious but many interventions seem to do just this, introducing certain technologies (blogging, wikis…) or pedagogies (concept mapping, learner-centred methodologies…) without detailed consideration of the curriculum content teachers actually have to cover.

The workshop is the result of three years of preparatory work with a wonderful team of teachers and teacher trainers from the college in Kandal.  Since 2008 we’ve worked with them to select materials and activities for those curriculum topics they found most challenging, try them out in their lessons, develop accessible manuals and short experiment videos (See for example this experiment video on toilet rolls and pressure) and learn to facilitate the activities themselves.

Manuals have been officially approved by the Cambodian Ministry of Education, an important milestone in Cambodia, as it means that they can be distributed and endorsed nation-wide.  Although we do hope that these manuals by themselves are inviting, an official stamp of approval is likely to act as an extra stimulation.  It’s great to see teacher trainers themselves facilitate the workshop without much involvement of us.  Above all, they enjoy it as well to explain all these experiments and activities to their colleagues as well.

The downside of involving all stakeholders is a very long development cycle.  Getting from a first selection of content until the final, approved product has taken us several years.   Having a first edition published sooner would have enabled us to envisage a second edition within the programme lifetime.

However, our objective is not to organize great workshops, but to improve science teaching.   Whether our workshops will have a strong effect on the ground remains to be seen.  There are quite a few hurdles between a good workshop and improved learning by grade 7-9 pupils.  Teacher trainers may feel insufficiently comfortable with the materials to use them, support from college management may lack, an overloaded curriculum and recalling-based assessment may favour rote learning.  Student teachers may misunderstand techniques, fail to see any benefits or be discouraged by their school environment.

Targeting teacher trainers has been a deliberate decision.  As they teach future teachers the potential impact is very high.  However, the adopted cascading strategy bears the risk of a watering down the content.    Measuring impact is notoriously difficult, perhaps even more so in Asia, where stated preference methods are prone to response and cultural bias.

Despite continuous M&E efforts we don’t have a clear insight yet into the impact of our activities at teacher training level on the pupils.  The main reasons are the fact that measuring impact is time intensive, that an observable impact may take time to manifest and that a clear impact of the programme within the messy complexity of teaching and learning in a crowded donor landscape is hard to distinguish.
References
Abbitt, J.T. (2011) ‘Measuring Technological Pedagogical Content Knowledge in Preservice Teacher Education: A Review of Current Methods and Instruments’, Journal of Research on Technology in Education, 43(4).
Koehler, Matthew J and Mishra, Punya (2005) ‘Teachers learning technology by design’, Journal of Computing in Teacher Education, 21(3), pp. 94–102.
Mishra, Punya and Koehler, Matthew J. (2006) ‘Technological Pedagogical Content Knowledge: A Framework for Teacher Knowledge’, Teachers College Record, 108(6), pp. 1017–1054.