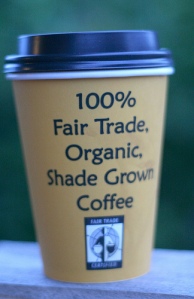 “A CUP of “fair-trade” coffee used to make mud taste good, and you could buy it only in churches and charity shops (The Economist).

A recently published 4-year study of The School of Oriental and African Studies (SOAS) in London which uncovered some uncomfortable findings about the fair trade industry in Ethiopia and Uganda, may make Fairtrade coffee even taste less good.  It has raised a flurry of reviews (The Guardian, The Economist).  Some extracts.

“Our research took four years and involved a great deal of fieldwork in Africa. We carried out detailed surveys, we collected oral histories, we talked to managers of co-operatives, to owners of flower companies, to traders and government officials, to auditors, to very young children working for wages instead of going to school, to people who had done fairly well out of Fairtrade, and to people who appeared not to have benefited.”

“One of our interviewees, James in Uganda, is desperately poor and lives with his elderly father in an inadequate shack very close to a tea factory supported by Fairtrade. Despite the fact that his father was once a worker at the tea factory, James is charged fees at the factory’s Fairtrade health clinic. He cannot afford them and instead has to make his way on one leg to a government clinic more than 5km away to get free treatment.”

The study raises some questions about Fairtrade, to say the least.  It may not fit with our view of helping the poor, but workers may be better off working with large producers, offering higher wages, better facilities and more days of work.  Moreover, most of the organisations that are certified tend to come from richer, more diversified developing countries, such as Mexico and South Africa, rather than the poorer ones that are mostly dependent on exporting one crop.  As one of the researchers writes:

” If we are interested in what makes a difference to extremely poor people, it is important to compare areas with Fairtrade organisations not only with other smallholder producing areas, which we did, but also with areas where producers are much larger. If larger farmers can pay better and offer more days of work, this is surely an important thing to understand.”

The findings may have some parallels with wider issues with development: